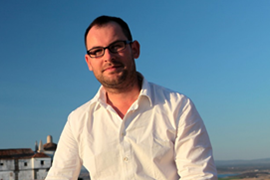 The GROW team is truly saddened by the tragic death of one of its members, Michał Maćkowiak (and his wife, Hannia).

Michał Maćkowiak was a Pole that felt in love for Lisbon and Portugal, by chance. In 2006, while taking the M.Sc. on Electronics and Information Technology Engineering, at the Warsaw University of Technology, he ended up being the last one to choose a place for doing the thesis within the ERASMUS exchange programme, and the only place left was IST – Lisbon, so he decided to take the risk and to spend a few months in our research group. This was the beginning of a new stage in his life, spent in Lisbon, which ended tragically on Aug. 8th, 2014, when he and his wife Hanna felt from a cliff nearby Lisbon.

After graduating with the Ph.D., in July 2013, he kept working in our group, in several projects. He had already quite a track record as a researcher, but his life was not only about research and family (he was married and had two children). He was also very keen on photography, which we could consider to be his “professional hobby”, besides having an entrepreneur spirit as well.

More than a brilliant colleague, we lost a cheerful friend. Our thoughts are now with Michał and Hannia’s families, and most especially with their kids, Sozia and Leon. We really miss them.

GROW is receiving one more member. Since mid-September, Alessandro Simonelli, an M.Sc. Student, is working in his thesis. We wish him good luck.

Zeinab Mhanna, “Analysis and Modelling of the radio channel in an Ultra Wideband Backscattering based RFID System”

Sina Khatibi and Luisa Caeiro, “Integration of VRRM in OAI”

Mónica Branco, “Fact on Usage and (Lack of) Concern of Portuguese Youngsters with Mobile Phones”

A special session dedicated to the memory of Michał Maćkowiak was held in the Krakow meeting. Work is progressing on the book, with edition of sections on off-body communications and radio resource management.

INOV contributed to the new survey about the best ways of reducing radiation from wireless communication systems, and hosted a meeting with the Karlsruhe Institute of Technology partners (WP2). Work is progressing on EMF exposure metrics, SAR simulations (WP2) and assessment of the exposure index (WP3), taking realistic environments into account. INOV contributed to Deliverables D2.6, D2.5 and D3.3. OPNET simulations on optimisation of locations for network topologies are going on (WP5), contributing to already finished Deliverable D5.1 and IR5.2. A new version of the document on inter-project collaboration and other contacts was circulated by Filipe Cardoso.

INOV is working on Cloud-RAN, validating the concept of virtualising the baseband unit of an LTE basestation, aiming at using OpenAirInterface’s (OAI) emulated LTE eNodeB. The management of virtual radio resources of multiple operators is also being studied, the developed models being currently under implementation in OAI.

In WP1.1, the document “Modelling of Virtual Radio Resource Management“ has been submitted and discussed with partners. In WP1.3, the work on channel coding and MIMO capacity for body-to-body channel is progressing, and a joint paper with Poznan University of Technology was presented at ISWCS2014. In WP2.3, the cooperation with EURECOM and the development of the LTE eNodeB is progressing well.

The final ceremony for Prémio FAQtos 2014 was held on July 5th. The 10 finalists presented their work, and a jury chose the winners. The 1st prize went to Arouca, the 2nd one to Oliveira do Bairro and the 3rd to Fátima. A special mention was also delivered to a group from Aveiro. The 2015 edition of Prémio FAQtos has been launched, the dissemination materials were sent to schools, and the 59 groups were accepted. Continuous monitoring of EMFs was launched in Matosinhos, with 6 monitoring stations active in FAQtos’ website from July to October. A public ceremony in the city hall held on October 8th has officialised this collaboration. An information action was held on Felgueiras secondary school.