The nowadays continuously increasing number of mobile users, devices and new mobile applications has resulted in the mobile data traffic growing at an unprecedented rate, which alternatively has a significant impact on the complexity of processes required to provide reliable cellular networks. Over the last few years, mobile operators are struggling to cope with these challenges. Still they rely on highly centralised and custom hardware components that are not designed with elasticity in mind, leading to a weak optimisation of resources during non-peak hours and frequent overloads during peak hours. A model was proposed for network performance, comparison the location of data centres in an LTE-A network with an implementation of a virtualised infrastructure, by separating base stations into Remote Radio Heads (RRHs) and Base Band Processing Units (BBUs). A Portugal countrywide network (cell site locations), with some thousands of base stations, was taken as application example. 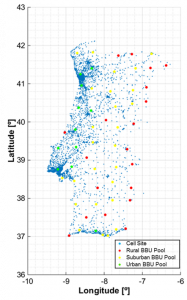 As usual, July is the month for one more gathering of GROW members, and their families, in Monsaraz, for one more STAR WARM (STill AnotheR Wonderful Annual Reunion in Monsaraz), this year on July 4th, for the 15th edition.

“Capacity Analysis for On-body Communications in an Indoor Environment”

Contributions to the section on “off-body” communications were sent.

New simulations with the Google Glasses are being carried on, in WP2. A paper with a survey on low EMF exposure techniques and networks is being prepared to be submitted to IEEE Communications Surveys and Tutorials. Deliverable D5.2 is being finalised and will be delivered soon.

The 10 finalists have been announced and they will present their project in the final ceremony to be held July 11th.