Several strategies for the provision of physical capacity to multiple Virtual Base Stations (VBSs) with different type of requirements have been presented and evaluated. The management of radio resource sharing is based on the perspective of Virtual Base Stations as an aggregated connectivity resource abstracted from a group of Radio resource Units of different Radio Access Technologies, allowing to benefit from Cooperative Radio Resource Management strategies. Instead of looking at wireless virtualisation from the perspective of the instantiation of virtual machines in the wireless nodes, our view is the virtualisation of the wireless access to provide a contracted capacity to the Virtual Network Operator, in order to serve its end-users. Three situations have been explored: the number of VBSs is increasing for all services in the same way, one VBS per service (Harmonised case); the number of guaranteed bit rate (GRT) VBSs increases by one for each GRT service, while the number of best effort (BE) VBSs is maintained with two VBSs for each service (GRT case); the number of GRT VBSs is maintained with two VBSs for each service, and the number of BE VBSs increases by one for each BE service (BE case). As an overall conclusion, one can say that the percentage of leased GRT capacity over the physical one is the main factor to take into account for physical capacity sharing, superseding the number of created VBSs. This analysis confirms the need for establishing a limit for the data rate contracted by GRT VBSs, independently of the number of VBSs, in order to allow an efficient use of Radio resource Units among all the VBSs deployed within a cluster. 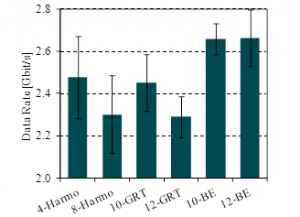 GROW will have, in June, once more, the visit of Slawomir Ambroziak (Gdansk Tech. Univ., Gdansk, Poland), following an existing collaboration in between the two research groups. The aim of the visit is to work on the development of model for channel characterisation for dynamic Body Area Networks.

A joint work in off-body channel models for Body Area Networks with Gdansk University of Technology is progressing.

Based on the work done so far in WP5, two papers were submitted to a Special Session on Low-EMF Radio-Link Technologies and Wireless Networks Management on the ISWCS2015 conference. This work was also inserted in D5.2 “Smart low-EMF architectures: results and recommendations”, the final deliverable of WP5, and will be into WP2 report as well.

27 groups have delivered their project on the 2015 edition of Prémio FAQtos. The selection jury is now evaluating all the material delivered, and the 10 finalists will be announced on June 12th. The final Ceremony of this contest will be hosted at IST on July 11th. Continuous monitoring of EMFs is still ongoing in Valongo, with 5 monitoring stations, and 1 further station is installed in Felgueiras, with the removal already planned for mid June.